Taking on a woman with kids – Advice for Australian Filipina couples

Taking on a woman with kids – Advice for Australian Filipina couples

The Philippines is full of romantic women, and a significant percentage of macho males who make babies but won’t support them. As a result, finding single mums isn’t such a tough thing. There are plenty of them, who gave themselves body and soul to men who don’t like wearing condoms!

I married a single mum myself. I don’t regret that. In fact it was my now 18 year old daughter (who came in a “Buy One – Take One” package with my lovely wife) who suggested this BLOG topic. Mila came to Australia on a Subclass 300 Prospective Marriage Visa many years ago, and her/our daughter Remy followed on a Subclass 445 Dependent Child Visa. 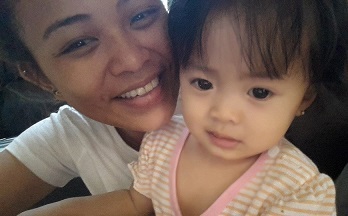 I love kids. Anyone who knows me knows this. We have 5 kids (plus Jeremy, who isn’t so cute anymore). So to me? I can’t imagine leaving kids behind. However there are certain factors that can make things either easier or harder.

In the Harvie’s case?

Yes, we have plenty of kids here. Only one is Mila’s biological daughter. The others are “acquisitions” who ended up very welcome on our doorstep and are as much our kids as they could ever be. For now, I’ll explain about normal biological kids who come as part of the package with your lovely single-mother lady.

In my case, Remy was 4 when I met her. That’s her nowadays in the pic above, with Maggie who is the youngest of our brood. (Watch that small face. She will be World Dictator one day!)

Remy knew she had a Dad out there somewhere. Of course she did. Everyone does. I turned up one day. Her mum told her I was Daddy, and she loved me from that moment on. The feeling was mutual. That in itself made it easier. 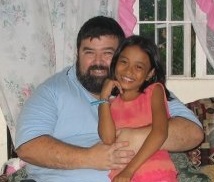 Little Remy and her Dad

What also made it easier was that we set what I think was a good precedent right from the start. I said that there would be no “step parent” nonsense. Families are families. Mila would be Mum to my two kids (Jeremy still calls Mila “Mum”), and I would be Dad to Remy. None of that “your kids – my kids” stuff. I’ve seen how THAT doesn’t work, eg. “You’re not my father!” So that’s how we started.

One more thing? Despite all the trends about being multilingual, my belief is that languages can either unite people or divide them. They can be used to exclude, and in a family this leads to division. I don’t speak much Tagalog (despite my very good intentions) nor do I speak the small-town dialect. Remy was going to an Aussie school. We chose to speak English only at home. Remy, being a small kid, had an Aussie accent that you could cut with a knife in no time at all.

I have seen other cases, especially when the kids are older and either still have a dad somewhere or have just had a long time to get used to the situation being one of mum-and-kids-only. It will also happen if mum isn’t much on being cooperative especially in those cases where she isn’t “the worker” that I mentioned in the last BLOG post.

This is where the kids don’t accept you as their new Dad, and where the bond between mum and child(ren) is impenetrable. My previous two girlfriends (pre-Mila) were also single mums, but whilst I was willing to be a dad to their kids, the necessary factors were not there. In the first case, not sure the child was all that aware of my existence at all and the mum didn’t do anything to change that. Second time? Child definitely liked me and thought I was fun, and definitely liked the tinned peaches I brought from Australia. But the fact that over our approx. 1 year relationship she never taught the child English, this was not a positive sign. How could the child ever be my child if I couldn’t even talk to her?

I’m not being a superior colonial-type person. English really is a silly language. However it happens to be language of Australia, and chances are it’s the language of the Aussie sponsor. It also happens to be, rightly or wrongly, THE international language. It’s beneficial to be fluent.

Go down the wrong path, and you will find yourself sitting in one part of your house by yourself eating your sausages and mashed potato, whilst your beloved is sitting with the child in another part of the house eating rice and fish with their hands and watching Eat Bulaga on The Filipino Channel! That’s not a family, now is it? It’s never been like that with us Harvies, and to this day with our much larger family it’s very much a united crew.

Before taking on a ready-made family, please think hard about what you want. And talk about it until you end up with something you are both happy with. If not, at least one of you will end up miserable.

Bridging Visas – Can you get one?
The Filipina princess and the Filipina worker!