We at Down Under Visa manage a lot of Australian partner visa applications. Most of them are for couples who are married or will marry, but many are for de facto couples. Yes, it’s possible to apply for a partner visa based on a genuine and established de facto relationship. And why do people apply as de facto couples? Mostly because one or both of them are still married. Annulments take a long time in the Philippines to organize, and some couples prefer to avoid this if they can. Hard to blame them, really. 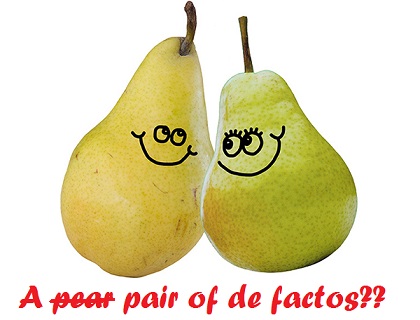 Can you apply for a partner visa as a de facto couple if one or both of you are still married legally to someone else? Yes, as long as the new relationship is genuine and exclusive. In other words if one of you is still physically/emotionally/romantically involved with the legal spouse, then no you can’t. But if that relationship is over bar the paperwork, then yes you can. It happens all the time.

Is it easy to apply as a de facto couple?

It’s easier if the relationship is genuine. If it’s not, then it’s hard. Why? Because they don’t like people playing the system. If they let someone in on a permanent visa (or on a temporary visa that leads to a permanent visa), then they want to see that the application is genuine. That’s fair enough.

But no, it’s never actually easy. There’s a lot of work involved.

What they want to avoid is those who think this is an easy option, and that they can avoid the commitment of a marriage to get a quick visa based on a relationship they can easily walk away from later. Picture a student visa holder sharing a house with a flatmate or two. Student visa is running out. What the heck! Get a flatmate to pretend they’re a de facto couple. Both have the same address, right? Wrong!

There’s a big difference between sharing an address, or even sharing a bed, and living in a genuine de facto relationship. De facto does not mean “friends with benefits”. It means “in fact, in reality, in actual existence”. Basically, you are a married couple without the piece of paper. All other aspects of commitment to each other and leading a shared-life, they should be there. And of course they will scrutinize the evidence provided to see that this relationship exists.

Is a de facto partner visa application something you should organize yourselves?

You’re perfectly entitled to organize any visa application for yourselves that you like. But from our experience as Registered Migration Agents who specialize in partner visa applications from the Philippines to Australia, I hope that you think this one through carefully. Partner visa applications are challenging enough. Add the need to prove that a de facto relationship exists onto that, and you have a tough job ahead of you. If they are not absolutely convinced, then they will refuse the application. Get some professional help!

Divorce in Australia – Is this an option?
Aussie-friendly places in the Philippines?