Public holiday here in the Philippines, so no office today.

Today is not only People Power Day, but it’s 30 years today since 25 February 1986 when Ferdinand Marcos left the Philippines and Corazon Aquino was sworn in as President of the Philippines. 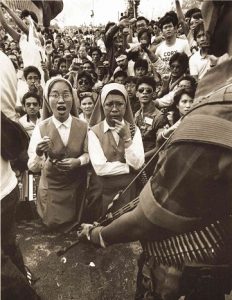 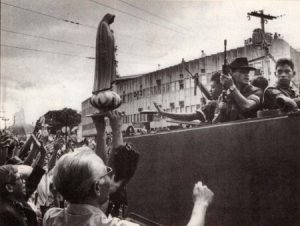 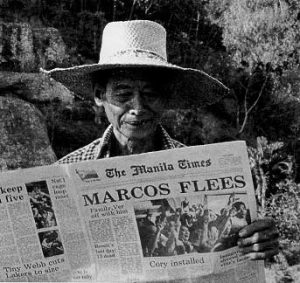 It’s called People Power Day to commemorate that it WAS in fact “people power” rather than gunfire that brought the Philippines out of 21 very dark years. It happened because of the humanity that exists in the Filipino people. Soldiers who were ordered to open fire on the crowds defected in droves. There was no way they could go home and face their mums if they had shot nuns praying the Rosary.

Marcos finally lost the support of his buddies in the US, and they bundled him off and snuck him out of the country where he died in exile. Cory Aquino took power and did what she could to ensure that a dictatorship would never again exist in the Philippines. Is the country trouble-free now? No, but at least political freedom exists and it’s now a nice place to live without having to fear the police or the army.

Despite remaining an Aussie at heart, I’m also proud to call this place my home. And I’m proud of what ordinary people did 30 years ago today and the difference they made just by being ordinary people with caring hearts.

You can read more about what happened HERE if you like. That’s just a brief summary. There’s plenty you can find on Google. Today I hope that kids growing up who weren’t alive 30 years ago are fully aware of what happened, and that they will ensure that similar history is never repeated.