We at Down Under Visa concentrate on visa applications for Filipinos and Filipinas, and primarily for those who are here in the Philippines (or have gone from Philippines to Australia and are applying inside Australia). We have managed visa applications for English in UK, South Africans, Russians, Japanese, Ukrainians, Haitians, Brazilians, Ecuadorians, Chinese, Indonesians, Thais and no doubt a few others especially in our earlier years, however these days it’s almost always Filipina girls and a few Filipino men. And it’s all partner visas, tourist visas for couples and child visas. We do this because this is where our experience and expertise lies.

And whilst we will generally manage applications for Filipinas overseas as OFW’s (Overseas Filipino Workers) in Hong Kong, Singapore, UAE (United Arab Emirates), Japan and other countries when the visa applicant is resident there, I’ll explain a few of the issues. 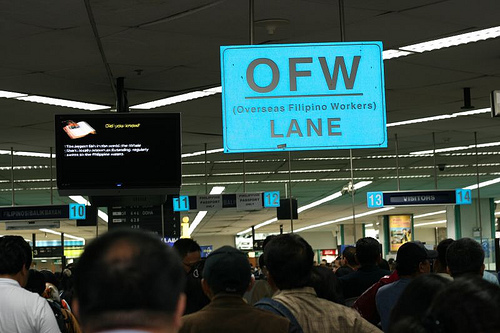 Us white people did not invent racism. It’s alive and well throughout the world, and Filipinos are often looked down upon in other countries in Asia and in the Arab world where racism is very active. Why? Many nationalities consider themselves to be superior to their neighbouring countries, and its somehow convenient to look down upon those whom you employ to clean your house and take care of your kids. The employer become the elite-class, and the Filipina becomes the lowly servant.

I attended a CPD (Continued Professional Development) seminar in a nearby Asian country a few years ago. I told a fellow RMA there that I specialised in partner visas for Filipinas. His response was that this was a good idea, because “they are good at cleaning the house”. I felt like punching him, but I walked away. Yes, attitudes such as these do exist.

And most of the staff in Australian Embassies and Consulates throughout the world are locally employed, ie. it’s generally not overseas-based Aussies who are making the primary decisions about Australian visa applications. Whilst it’s not always the case, and whilst there are plenty of perfectly fair decisions that take place, it’s not as easy to get a fair and unbiased decision made for a Filipina lady applying for an Australian visa in a country which is not her own. Not talking about anything corrupt. I can honestly say I’ve never come across anything like that. However there are times when it appears that a Case Officer has been unnecessarily harsh.

Some overseas posts are very difficult to deal with, whilst others we’ve found to be perfectly fine. However I could say that a Filipina lady will always get the fairest handling of her Aussie visa application here in Manila. Most of the decision makers here are Filipinas, and whilst they don’t go doing “special favours”, you can be assured they won’t have any issues with her being Filipina!

Tourist visas applied-for from other countries

The issue of it being hard for a Filipina to get a visa from a country that is not her own is accentuated very much when the visa applied-for is a tourist visa.

Why? Because a requirement is that the applicant should return to that country at the end of the visitor visa stay period. It’s not always so easy to demonstrate and prove this when the applicant doesn’t live there and quite possibly doesn’t like living there. Returning to a country where you work as a maid, or overstaying in Australia. Which one looks more appealing? The visa application needs to show that this is very unlikely to happen, and that she will be coming back.

Well, they often don’t believe this, and we get enquiries from prospective clients all the time who have had one or several visa refusals already. And in some cases we ask them if it is vitally important that they do remain in this country! Why not come back home at least for a short while? It’s highly likely they will be leaving this job soon enough anyway.

And in I think every single case where we’ve asked them to do this, we’ve been able to put together a successful follow-up visa application from Manila and they’ve later been on their way to Australia. Many are well and truly settled into happy and secure lives in Australia now.

And we also manage plenty of successful visa applications for Filipinas in countries other than the Philippines. However if you have had difficulties, or if we think you will have difficulties, we can discuss other options.

Filipina wife or girlfriend – Why does she need a visa to Australia?
Health coverage for Australian visa holders

Australian Visa Grants from Philippines in March and April 2021

Australian Visas from Philippines – Why you need a professional Migration Agent?

An update for Down Under Visa clients – Good news, & we need your help