Australian Tourist Visas (multiple entry) – They are NOT Partner Visas

Australian Tourist Visas (multiple entry) – They are NOT Partner Visas

The Australian Tourist Visa – A pretty generous visa, of great value when you are in the early stages of a relationship, and you want to spend time together in Australia with your Filipina sweetheart. This is when you’re not ready to commit to something permanent. Neither of you are completely certain that this is definitely “the one”, but you like each other (or maybe even love each other) enough that you want to see where it’s going. A couple of weeks together in resorts, hotels and family homes in the Philippines isn’t quite enough. You want to see how you go waking up next to each other in your suburban house in Newcastle or in Rockingham every day for three months and see if at the end of that time you can’t stand the idea of being apart.

Three months is a pretty good stay period, isn’t it? And a multiple entry tourist visa means you can repeat it a few times. Most couples have a fairly good idea at the end if this is what they wanted. Some? They email me after 6 or 8 weeks and ask how we can make this permanent? Some take the plunge and get married! Others? Some realise how wrong they were, and are glad they got a tourist visa instead of making a terrible mistake! For most people, three months is just enough time! 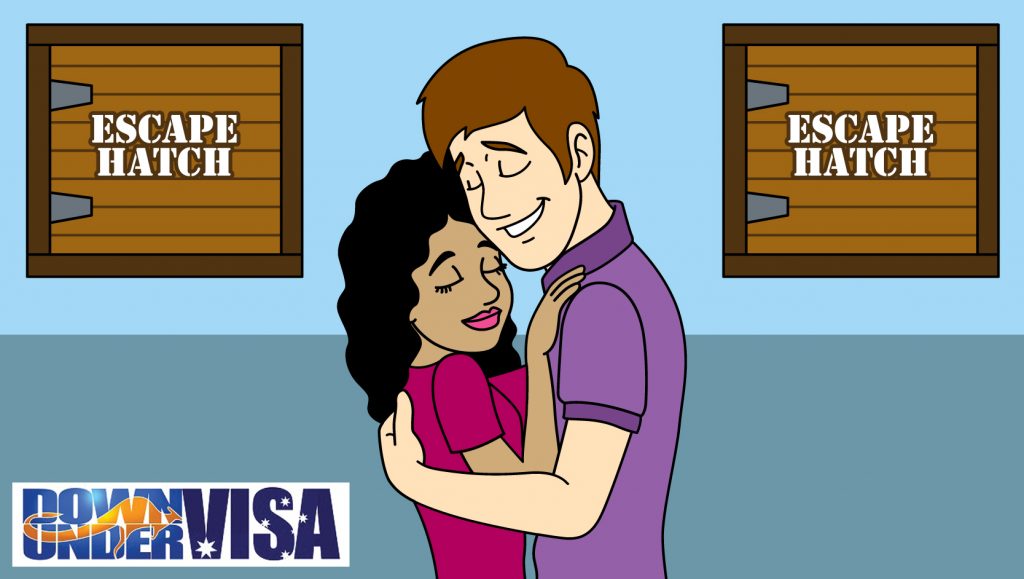 Together, yes. But not permanently!

The One Year Visa

Others? They complete one of our free online visa assessments, and they ask me for a one year tourist visa. Someone asked me for a two year tourist visa the other day. I’ve done a number of BLOG articles in the past about this topic, but people still ask. So I find myself writing again and trying to explain why this won’t happen.

Tourist Visas are for visiting…..and then returning. They are for people doing tourist things, ie checking out the Harbour Bridge, patting koalas and getting sunburnt on our glorious coastline. They are also for people visiting friends and family, and that includes Filipinas visiting handsome Aussie blokes (which, of course, is ALL of us!) to build and enhance relationships. Perfectly acceptable. The keyword is “visit”! That’s why tourist visas are also called “Visitor Visas”.

Remember what I said about about how three months should really be enough for a couple to figure out if this person is “the one”? Well, yeah. I believe that to be true. Still not 100% sure she’s the one? Can always apply for an onshore tourist visa (ie NOT an extension of the existing visa, because that doesn’t actually exist!) and get another three months. That should be enough. Does it take a year? Honestly, what uncommitted couple goes and commits to a one year stay together? “I like you a lot, but I don’t actually know that much about you. Let’s live together for a year!” Seriously? I think we both know what you’re trying to do!

Is a Multiple-Entry Tourist Visa a One Year Visa?

No. No, it’s not! Yes, in years gone by a multiple entry visa was often mistakenly treated as one and many got away with it. Visa-holders would spend the weekend in Singapore and then return again for another three month stay. Well, times have changed and as with most things they’ve got tougher rather than softer. If they think you’re using a multiple-entry tourist visa to live together as a de facto couple, they will come down on you like the proverbial tonne of bricks! They may let you in with a warning that if you do it again your visa will be cancelled, or they may even stick you on a plane back to Manila with a cancelled visa to your name.

I did an article the other week on this topic (ie multiple entry visas). Please read and please understand. If you get a multiple entry tourist visa from Manila? Plan on visiting two or maybe three times. Don’t push it or it will come back and bite you! Return within three months, and don’t return again for a month or more. No hasty returns. Again, if you can’t stand being apart for a month then you’re probably on the wrong visa! Yes, I know they’re expensive (ie Partner Visas), and they are also a whole lot of work. But nothing good comes easily, and life was NOT meant to be easy!

Been together in Australia for a year. Then what?

This is assuming you managed to dodge the Border Force welcoming committee and you managed to spend 12 months or near-enough in Australia on a multiple entry tourist visa, and you’re wondering what happens next. We have many couples who’ve just finished a 12 month visa stint together in Australia, and want to do it again. They ask me for a second “12 month visa” or “one year visa”. And I’m not so encouraging, because I know exactly how the Department will look at it.

Visitor Visas in the Migration Regulations have a Condition 8558 which may be imposed. It’s not quite mandatory, but they are imposing it enough these days that it may as well be.

Condition 8558 is a visa condition that does not allow a visa holder to stay for more than 12 months in an 18 month period.

So count back eighteen months. Have you been inside Australia for twelve months in that time? In reality, don’t expect to enter Australia again until 18 months after the first visit where you can start afresh, and don’t expect to spend another one year together! Don’t be too surprised when they probably grant you a three month single-entry stay! Not sure it happens anymore, but it years gone by it was fairly normal for a nice Immigration officer to tell a tourist visa applicant quite directly that they’ve had enough and that they need to start looking at a partner visa if they want to spend any more time together. You CANNOT cannot cannot spend year after year on tourist visas, because that’s not what they were meant for!

Get a partner visa! Some of the nicest people I know got one! I even got one for my lovely wife years ago, and I still wake up next to her!

Jeff Harvie is a Registered Migration Agent from Australia, but resident in Philippines since 2010 with his Filipina wife Mila and large extended family. Experienced with the Philippines culture, cross-cultural relationships and bureaucracy as well as Australian visas and Australian Migration Law, he writes with authority and fortunately with enough informality and humour that the average Aussie gets it!
Australian Filipina Relationship Problems - Nationalism and Taking Things Personally
Communication - The Key to Relationship Success