Filipino patience and tolerance – something Aussies should learn

Filipino patience and tolerance – something Aussies should learn

I thought I might go off visas for just a bit to share my long-term observations about one of the key differences between Filipino culture and Australian culture, especially obvious as Australian culture is changing. I just turned 50, and I’d like to believe I’m not what you would call “old”, yet I’m definitely at an age where I can see that things have changed in Australia since “my day” (excuse me while I shudder). I certainly can say that I see this more now that I’ve been living here for just over 5 years full time. The difference is in how Filipinos tolerate imperfections in people and things.

“Me” culture versus “us” culture

People in the Philippines are more easy-going, and I think at the end of the day it makes Filipino people happier! That’s my observation.

I don’t know where it comes from or why. Maybe it’s due to the remoteness of how we live these days? The internet? The phones? The fact that people can go out to dinner with someone and sit there glued to a phone the whole time and think that’s OK? Instant gratification, and all with minimal actual human contact. Yes, we gain a lot and we can be in contact with information so quickly, but maybe it’s raised our expectations as to what we can reasonably expect from the world? We expect everything to be perfect, and we expect everything right now! It’s all about “me” and considerably less about “us”. 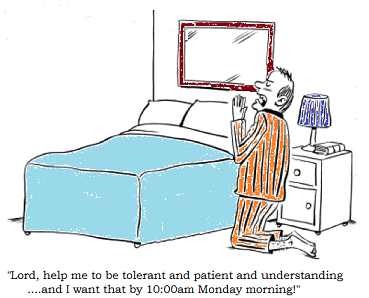 By contrast, we see something very different here in the Philippines. And I’m as guilty as the next person when it comes to being critical of things not being “Aussie standard”. Most definitely. When things take too long, or when someone tells you they are “…on de way, sir!”, which means “I could be there in 5 minutes, or 3 hours, but I won’t be specific”, yes, I often get annoyed and impatient. However if in return we asked our Filipina (or Filipino) clients (which we definitely do NOT) to come to our office to sign documents and it took them 6 hours on buses in the heat and the traffic, most of our clients would not complain at all! As I said, we wouldn’t do that anyway! But imagine what would happen if we did that with Aussies? They’d be extremely annoyed!

Please note that this all just dawned me, and I’m fleshing this out as I write. I admit being guilty of judging things and behaviours that I consider to be slow and inefficient. Yet at the same time I live and work surrounded by the kindest and most patient people in the world, ie. Filipinos. I BENEFIT from this! The very nature that causes some things to be what I’d call slow and inefficient, this is also the source of the patience and kindness that is shown to me.

Philippines and Australia – Some differences

We have some builders here at home at the moment doing some renovations. Yesterday they assembled our new bed and brought the mattress upstairs. Not a problem for them, even though it was early evening. The other day one of them climbed a tree out the front to lop off branches that were getting in the way of the power lines. And years ago I remember a guard at the airport in Manila carrying carry-on luggage down some stairs because he could see we had our hands more than full. Would any of these things happen in Australia? Maybe with some older Aussies, particularly in the bush. But in the city? I won’t say “never”, but I will say less likely than you will find here. I can remember a taxi driver at Brisbane airport being so angry at having a short fare from us that I kept my mouth shut lest that he hit me! He was that angry, and he didn’t try to hide it! Yet I know of tricycle drivers here who will carry an elderly person up and down stairs because they can’t walk, and they won’t say a single word about it.

No one feels insulted at being asked to do something that isn’t “their job”. No one gets upset if you “waste their time” by arriving late, or keeping them back late. Yet as Aussies we seem to be increasingly impatient and so often upset when people and things around us don’t meet our (I think!) increasingly high expectations. We either feel disappointed, or we are copping a battering when we ourselves don’t meet the expectations of others! Here in the Philippines? No, not a perfect society. Not by any means. However a much more tolerant society, where people accept each other…..AND accept cranky Aussies…..with endless patience and kindness.

Maybe rather than wishing that everything here worked like clockwork as it sometimes works in Australia, maybe we could benefit by watching and learning from people who are probably much happier and more content with their lives and particularly with those people around them? Maybe we would enjoy our lives more if we did? Just my thoughts.