The whinging Aussie in the Philippines

The whinging Aussie in the Philippines

You know what is increasingly getting on my nerves lately? The Aussie (or American or Englishperson, etc) who lives in the Philippines and complains incessantly! The websites and internet forums and fanpages that are full of nothing but complaints about how terrible are all things Filipino to Aussies in Philippines.

As Australians, we all know the expression “Whinging Pom”. It refers to the Englishman (pommy) who comes to Australia and complains constantly about how much better everything is in England. Well, guess what happens to many Aussies in the Philippines when they either visit a lot or particularly when they settle here as Aussie expats? They turn into Whinging Aussies. 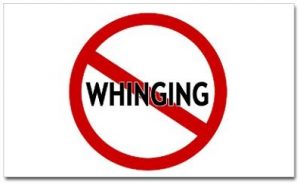 Incidentally, why is it that everyone “migrates” to Australia, yet Aussies are only ever “expats” here? Worth thinking about.

I’ll always identify as an Aussie. Always loved Australian values. I was the kid at school who used to get annoyed when the other kids thought the last letter of the alphabet was “Zeeee”, and always preferred saying “G’day”. To this day I’ll never say “Hi”. However, I choose to live here (not just because I have an Australian Filipina relationship) and make my home in the Philippines, and the more I’m here the more I love this place.

Why does Jeff particularly love the Philippines?

Speaking as an Australian expat in the Philippines, I really love the Filipino people, and they are the ones that make this place such a great place to live. Nothing to do with the food, climate, scuba diving or whale sharks. I’m speaking for myself, of course. I’m not a huge fan of Filipino food, but I am a fan of Filipinos.

What in particular? I’ve already said what I thought about kindness in a previous article HERE.

I might just add something to that topic of Filipino kindness briefly. I had to go to the main NBI (National Bureau of Investigation) Office in UN Avenue in Manila the other day to get an NBI Clearance (which most will be familiar with). I have a slipped disc in my lumbar region, and standing for even short periods causes me severe pain. We told them this, and I was literally in and out on 10 minutes. They rushed me through and made serious allowances…..and no, we did NOT have to bribe them. I’ve had staff members in other Government and business offices actually come outside and see me in the car for the same reason, simply because we’ve asked and because they’re kind.

And what else? I think “resilience” is partially the right word. Plus the ability to not to dwell and obsess on negative things. I can’t find the perfect words, so I’ll describe a scenario that you would have difficulty in seeing in other places (ie. other than the Philippines).

We have a house full of kids. Love kids. Hate silence. And I’m a big kid myself. I think I’d rather talk to a bunch of kids (especially Filipino kids) than to a bunch of adults any day, and I believe that whilst growing old is compulsory, growing up is optional! Our kids are mostly children from the family. My youngest actual biological child is Jeremy, who is our office manager. We have kids from the province whom we make a permanent home for. They call us Mum and Dad. Well, the other day we took in a couple of orphans. Nieces of a brother-in-law from Samar. Their dad died last week, and they have nowhere else to go. And note that we’ve never met them, and neither have our kids here.

Well, they have been here since yesterday morning. Please look at the photo below taken last night, and take note of the faces. 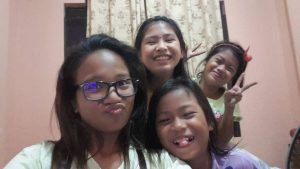 I see two kids in that photo who are incredibly brave, and who are much happier over what they have now than over what they’ve lost. And I see two other kids who have opened their hearts as willingly as we’ve opened our doors and accepted two new sisters without the slightest hesitation.

Is there a word for that? An expression? Probably not. Not something we all see very often…..except in the Philippines. I’m sure that such topics have been the substance of TV shows, both about the emotional trauma of the newcomers and of those who resent the intrusion. Here? It’s handled with a courage, a resilience and an unwillingness to entertain miserable mental-states. Is it toughness? Innocence? I don’t know. All I know is that I have the greatest respect and admiration for this. Yes, us westerners can make money and make efficient things happen all around us, but at the end of the day we need to have a life that’s worth living and able to be enjoyed. We can learn a lot if we look and listen!